Tiger Takes the Tour Championship by Its Tail; Wins His 80th Title 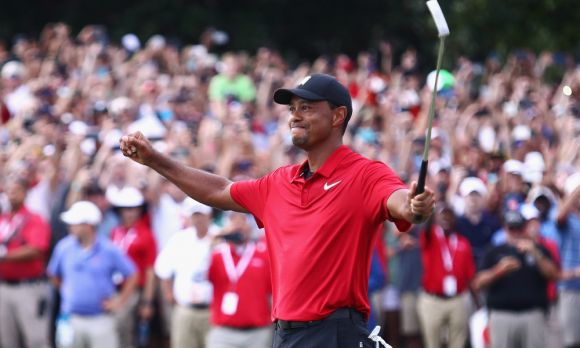 Talk about a flashback.

For all his foibles -- putting it mildly -- there's no doubt Tiger Woods is still a phenomenom. A huge one.

Dude's got a global appeal that sports celebrities in North America can only imagine.

This week, at the PGA's final event of the season -- the Tour Championship -- Atlanta's sports teams could only dream of the following and ratings Tiger accumulated.

Now, after all that's gone between, he's finally claimed his 80th: Not to be lost in Tiger's triumphant comeback from the depths of world golf's obscurity zone is the point that the FedEx Cup itself -- and the $10million check that goes with it -- went to Justin Rose:

The FedEx Cup, kinda like NASCAR's Xfinity Series, can be a funky one to follow for casual fans. It's one of the reasons the PGA's gonna make another run at clarifying its format in 2019.

The idea is for a less complicated celebration at the end.

For this year, though, two dudes are pleased with the outcome.