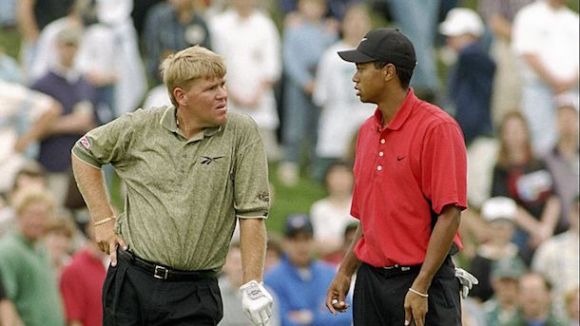 OK, so it happened an ocean away.

It involved two players with hardly anything in common.

Except maybe unfulfilled expectations due to their own personal choices.

They're still on separate paths:

Whatever Woods is doing to prepare for tournaments is missing something. Dude just can't get off to a contender's sorta start.

His even-par 71 at the Northern Trust Open was the 12th time in 15 events this year that he hasn't finished with red numbers after the first round.

It kinda got him lost in the crowd:

Meanwhile, across the Atlantic, the Czech Masters must've dug deep to put together enough of an appearance fee to interest one of the game's more intruiging sideshows.

One who still flashes game every now and then.

Big John Daly firing at pins out there 🎯#CzechMasters pic.twitter.com/h4eooFbKoL

That little gem was part of Daly's 8-under first round total of 64, matching the course record.

Odds are that'll be him for the weekend and dudes scrambling for a spot on the Europeans' Ryder Cup team -- like Thomas Pieters -- will take over the headlines from here on out.

One advantage for Daly in the Czech Republic: no oceans near golf courses.

Clearly, one round does not a tournament champion make.

Back in the USA, Tiger might offer that one round keeps him from being a tournament champion again. Dude can pound out a killer round or two himself, but the slow starts force him to go for fast finishes, and they're just too much for him right now.

It still doesn't keep both Woods and the PGA Tour from pulling out the stops to re-polish his image. After all, the Northern Trust is the first FedEx Cup event, and he's got a slim shot at making a move:

Dude's got an image that doesn't even require hot rounds every once in a while, and dude's doing damn well with it.