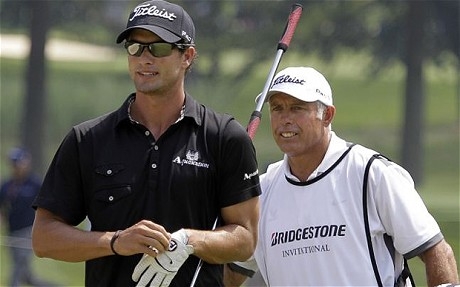 If you think the hard feelings between Tiger Woods and his ex-caddy Steve Williams have healed, you'd be wrong.

Williams, who is now carrying the bag for Masters champion Adam Scott, didn't have a problem taking a few pot shots at his former boss over what happened last week at the Masters.

"From what I can gather, he took an illegal drop, signed a scorecard and left the course ... Under most circumstances, that would result in disqualification … If the Rules of Golf are upheld, I believe he should have been disqualified."

It's possible Woods' ex-wife, Elin Nordegren --  it's actually pronounced ā-leen for you non-Swedes -- has fewer embers of anger glowing than his former caddy. This gives pause to the role of a caddy in a pro golfer's life. It's considerable, and in most cases, significant. So when there's a split, it can sometimes be uglier than a divorce.

In the case of Williams vs Woods, the odds of collateral damage were always strong. Caddies earn around 10% of a player's earnings, and this pairing made Williams a millionaire many times over. In fact, it made him the highest-paid sportsman in his home nation, New Zealand, where golf is revered almost as highly as rugby, a sport in which the Kiwis are legendary worldwide. With such a high profile, any development involving Williams' career is going to be newsworthy there, and in this age of round-the-clock news cycles, anything newsworthy somewhere stands a chance of going viral everywhere.

On top of that, Williams isn't exactly a shrinking violet. He makes certain his side of any story is out there, front and center. This rift began when an injured Woods was forced to withdraw from the US Open in 2011; Williams requested permission to caddy for Aussie Adam Wood, a player with whom he's had a longstanding friendship. Woods, as he's been known to do, considered this to be an act of treason and summarily dismissed a shocked caddy who stood by him through scandalous times.

There was no way Williams was going to go quietly. He didn't.

This is a dispute that has no heroes. Williams has made outrageous comments before. He's crossed the line with his vindictiveness; one would think a personality of his stature would know the risks of being taken out of context, as he allegedly claimed.

Golf these days has more sideshows than Barnum & Bailey. This one looks like it will command a spotlight for a long time to come.