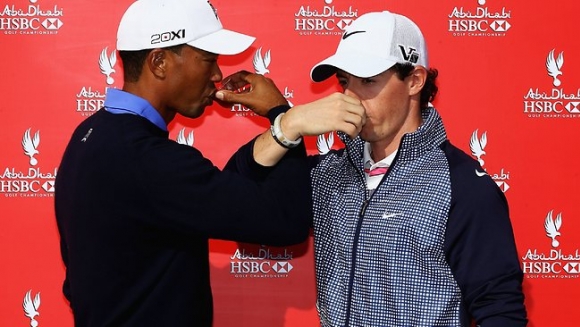 It's always interesting to hear personal details about prominent athletes.

Of course, Tiger Woods has been in the public spotlight seemingly forever, and there's certainly been no shortage of dirt on him.

Recently, Rory McIlroy provided insight into a number of subjects, most amusingly his fascinating relationship with Woods.

Apparently, the Ulsterman finds Tiger just as intriguing as the rest of us, almost like a case study.

It appears Tiger's quite obsessive about training, which is certainly not a big secret.

However, this obsession seems to deprive him of rest, leaving him up at all hours of the night.

But it gets awfully lonely working out with free weights at 4am.

How does he combat the isolation?

By texting McIlroy, of course.

McIlroy has mentioned the many personalities of Tiger, so it's unclear which one is texting him at all hours of the night.

Apparently, this late night camaraderie doesn't go over well on the home front, as Rory's fiancée Erica Stoll has voiced a few objections.

But hey, it's a dude thing.

Tiger's finally returned to competitive golf, and if his bad back would just cooperate, perhaps he can become a legitimate threat once again.

At the very least, it would give Tiger and Rory more fodder for their late-night texting sessions.