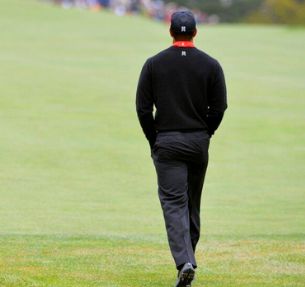 ESPN the Magazine is turning 20 years old this month.

Who can you think of to be a great fit on the cover?

Someone in all of their wisdom chose Tiger Woods.

They even went so far as to say in the headlines: Tiger's Back! In a way, these geniuses were right on.

Tiger was indeed back this weekend. 'Way back, that is.

His Woodness saved his best round of The Masters for Sunday, with a tee time so early, even the roosters were still hung over. Dude shot a 3-under 69 and finished tied for 32nd with those other two household names in golf: Li Haotong and Adam Scott.

If this is truly back, then ESPN The Magazine was right on the money.

Actually, the realists among us know Tiger's not back at all. After his disapointing performance this weekend, he's said to be taking a few weeks off.

This is great news for all of those sports hosts on TV and radio. They'll now have a few weeks to remind us all how great Tiger Woods is and bend over backwards to show everyone that they're not racist and that Tiger is Da Man!

What Tiger Woods is not is the most dominant athlete of our time, as proclaimed by ESPN the Magazine.

Dude's going through what every superior athlete goes through right now. His skills are -- and have been -- eroding right in front of the very people who tried to put him up on such an esteemed pedestal that even he could never attain it.

At some point, Mr Woods is going to have to put the clubs away. Nobody wants to see him hang on too long and go out like too many other legends:

Enjoy your time away from golf, sir.

Contrary to what the media thinks, golf will survive without you.