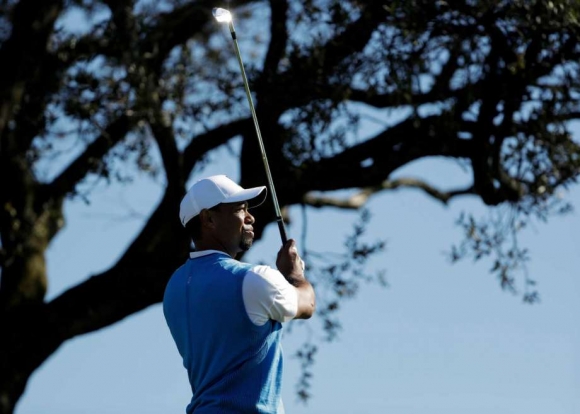 The South Course at Torrey Pines is no joke.

And that's before they set it up for a PGA event like the Farmer's Insurance Open.

That's an event that's played on both the South and North nines, the latter of which has been fortified but still doesn't compare.

Just ask Tiger Woods, on his first shot of the day, yet.

Who knew Ents were in the gallery, just waiting for this moment?

Later on, another errant shot popped a youngster in the neck.

Worse, no one pointed him out to Woods, so the little dude didn't even get a souvenir for his troubles. In fact, he took a back seat to the green in Tiger's recollections of the 13th hole:

Suffice to say, the South Course isn't as accommodating as those 50-yard wide fairways in the Bahamas.

Woods did have his moments, though, like ringing up his first non-tree birdie of the season.

He'd have a few more, including the 18th:

Still, the back nine took its usual toll: eight pars on the front nine; one on the way home.

It was a one-man scramble, too:

Put 'em all together, and they spell a four-over 76, tied for 133rd and 11 strokes behind Justin Rose, who got outta a few jams with some nifty hits of his own:

Dude concluded the day with this eagle on the 18th:

His seven-under 65 on the North Course puts Tiger eleven strokes behind, which means he'll need to fire a 67ish round on Friday or get the weekend off.

That'll probably cause a ratings hit for the PGA, but if Woods can stay healthy, they'll take today's shaky start.

And until he gets his TaylorMades under control, his fans would be well advised to armor up.