Tianlang Guan Learning from the Masters 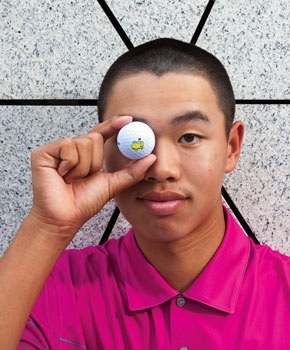 What were you doing when you were fourteen?
Playing video games and riding your bike, or maybe playing golf with Tiger Woods and Tom Watson?
Well, if you're Tianlang Guan, that's exactly what you'd be doing. Guan won the Asia-Pacific Amateur Championship last November, a prize that now comes with an invitation to the Masters attached.
When the Masters begins Thursday, Tianlang will officially become the youngest player in its history. Will he win? He's not shy on confidence, tweeting that he wanted to win it. Still, that's a bit of a stretch. How about this: Will he make the cut? More grounded: Will he get low-amateur?
In the eyes of the world, Guan is already a winner. Now is the time for him to soak up experience. Guan appears to have all the tools needed to be successful. He's knowledgeable beyond his years and is determined to make full use of every opportunity to learn and improve his game.
Even though the first ball has yet to be struck, it's a good time to look beyond this week and observe the impact Guan is having on the sport in his part of the globe.  As has happened with other sports -- remember the 'ping pong diplmoacy' tour? -- golf is providing a bridge between China and the West.
Guan may be the youngest golfer to qualify for the Masters, but given China's athletic development machine, he's most likely not the last teen prodigy we'll see from there. China is on the edge of a golf boom, Tianlang Guan is at the center of it, and the publicity of his progress in a Grand Slam event will surely focus the world's eyes not only on his talent but on the nurturing process his country may implement to ensure that others may follow in his wake.
With golf becoming an Olympic sport, such support would not be a surprise.
DAILY UPDATE