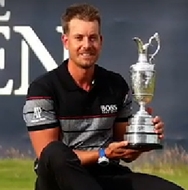 No, they don't need to use orange golf balls in Sweden.

They may have long winters, but the long-daylight summers make up for it.

In fact, linksters at a few of its 480 courses can make tee times 'round the clock, like at Björkliden, 'way the hell and gone above the Arctic Circle.

It's doubtful Henrik Stenson ever did the midnight thing. He was born and raised down south in Göteborg, Sweden's second-largest city. However, he honed his craft in the USA, and now, he's sealed his legacy in Scotland.

Yes. 63. Tying a course record set in the first round by none other than Phil Mickelson.

Who'd have thought ol' Lefty would be yesterday's papers that quickly?

The final two rounds were essentially match play. Stenson and Mickelson were the final pairing on Saturday,  and they began slightly ahead of the pack:

The two leaders couldn't have been more even if Stenson had been hitting from the left side. He could've if he hadn't switched to right in his teens.

They pushed each other to levels of excellence, approaching magnificence. The pack simply couldn't keep up. Neither could the record book: