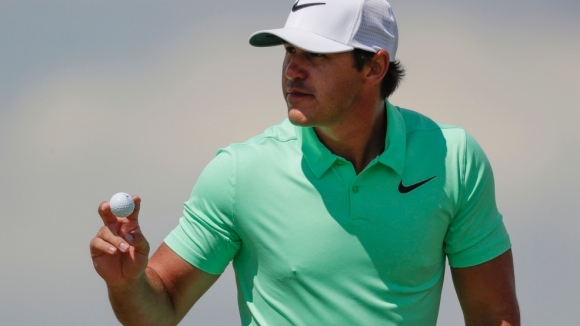 Being the great-nephew of an accomplished MLB player has its advantages.

One of them is that it takes seasoning in the minors before a player's ready for The Show.

Ironically, Dick Groat is one of the few who didn't. A two-sport star at Duke destined to be on two World Series champions -- including being the 1964 Series MVP -- he was so coveted by his hometown Pittsburgh Pirates and the NBA's Ft Wayne Pistons, Bucco GM Branch Rickey shot him straight to the big club to secure his services.

When Groat retired, he and his wife designed and built a golf course, which they own to this day.

Maybe the extended family association ultimately had something to do with Brooks Koepka getting into it.

Whatever it was, the 27-year-old Floridian had paid his dues by the time he played Erin Hills like a maestro to capture the 117th US Open by a comfy three strokes, besting bigger names such as Ricky Fowler:

Based on the solo applause, it seems like the award ceremony's become a private affair.

For the record, Koepka and Becky Edwards parted amicably. She's an elite soccer player and wanted to pursue her career in Sweden.

So Koepka dove back into the pool and came up with Jena Sim, Georgia's entry in the Miss Teen USA 2007 pageant whose acting résumé features such cinematic novelties as the legendary Sharknado 3 and Attack of the 50-Foot Cheerleader.

No doubt the reviews were better than the latest incarnation of The Mummy got, too.

Suffice to say, sidebars during the tourney's opening rounds were much more dramatic.

Action on the course put an early spotlight on another of the tour's young lions, Justin Thomas. Everyone was taking advantage of Erin Hills' softness due to rain and lesser wind, but none more than him:

However, the course did its job over four days, which is demanding that the event's best all-around player emerge victorious.

Beyond a doubt, that was Koepka.

In so doing, dude became the game's seventh straight first-time winner of a major.

Not to be forgotten is the undercard of highlights the tournament conjured, which for a brief moment shone a light on 40-year-old grinder Charlie Hoffman, among others:

Whether or not Erin Hills -- all 8000 yards of it, not counting another 3000 between greens and tees -- gets another US Open is up for conjecture.

The immediate and near future belong to more traditional courses, starting with Shinnecock Hills next year and remaining in that exclusive group until at least 2026, when it returns to ... Shinnecock Hills.

So much for experimenting with new venues.