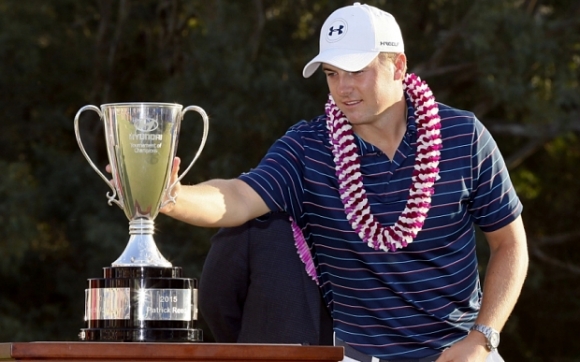 Not many dudes can ease up on the throttle and still post a -30 against par over four days.

But this is Jordan Spieth's world.

He made a challenging Kapuala Resort course look line a muny by storming through the first three rounds and only needed a six-under final 18 to cruise to an eight-stroke victory at the Hyundai Tournament of Champions:

What's it feel like to be Jason Day after this?

Dude racks up an impressive -15 event and finishes 15 strokes behind Spieth. He probably knows how his wife felt at courtside three weeks ago.

Even more impressive than matching Ernie Els (-31) as only the second golfer to win this event with a total score of 30-under or better, Spieth now joins Tiger Woods as the only two players since World War II to ring up seven tournament victories by the age of 22.

For the record, the torrid Texan's birthday is 27 July.

Suffice to say he's looking forward to a productive stay in the islands.

Up next: the Sony Open at the Waialae Country Club.