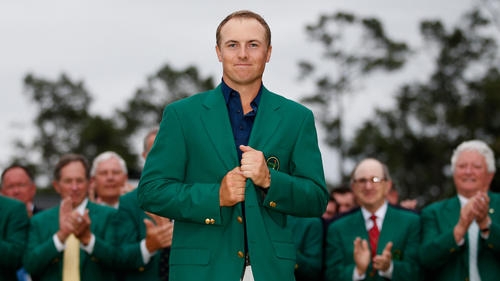 The catchphrase seems to be this is the dawning of a new age in golf.

But what just happened over the last four days at Augusta could portend to another significant issue.

First, though, time for the Jordan Spieth to bask in a bit of limelight. He earned it.

The key point in that analysis was a reference to Bubba being from golf's long-range bomber squadron but that he rightly needed a complete game to conquer Augusta, which as has been noted ad nauseum, was altered to counter that group.

Spieth's average drive is under 300 yards.

An avid disciple of Ben Crenshaw, millennial Spieth's approach is old school. His strategy is centered on putting and working his thought process back to the tee, ie- the old drive for show, putt for dough bromide. It's just more reliable.

But it's not for those who aren't working off a script:

So maybe the so-called new age won't be about superhero slammers but rather a return to finesse players who are more relatable to the sporting public. That resonates, big time.