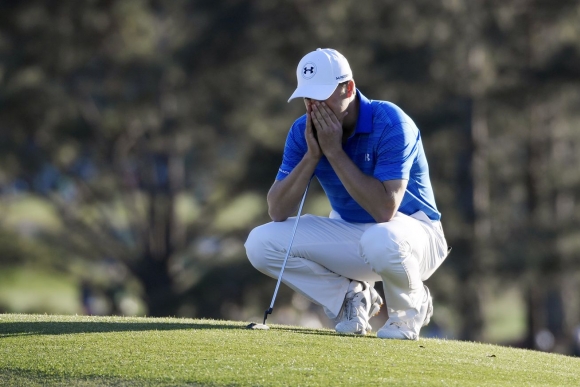 Time to remember the kid's only 22.

And it's too bad Jordan Spieth didn't remember to take a deep breath.

That mental lapse is the main reason dude didn't complete an unthinkable back-to-back wire-to-wire run through The Masters.

The 2016 Masters will be known more for how it was lost than who won it.

The 12th at Augusta National may be the world's best known par 3. It's the heart of the course's notorious Amen Corner.

And that's just for starters, as one of golf's legends will attest:

It could be that one of the recurring complaints about Spieth's game set the stage for his sudden loss of composure.

Those comments were made during the second round. So was this outbust by Spieth:

It's also not the first time the clock's been against him.

So, same hole; emotions coming to the fore, and as Player noted, the heart's already pounding faster around Amen Corner. Perhaps this was the recipe for disaster.

Spieth's collapse will live in infamy alongside Greg Norman's in 1996, but there's a significant difference:

The other difference is Norman's collapse happened late in his career, and he never really overcame it.

Spieth has time, and this moment during the traditional award ceremony will no doubt sear his memory until at least the next major comes along: