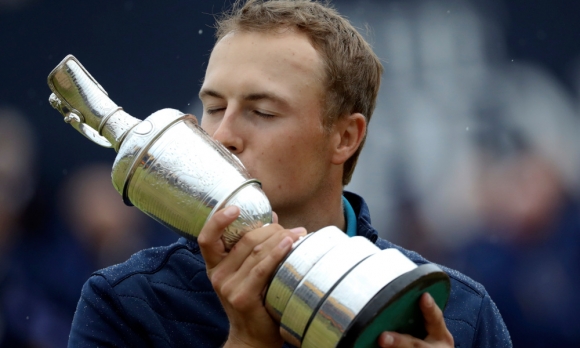 Even though that was three pops better than runner-up and final-day pairing partner Matt Kuchar, one shot in particular may have won the day for Jordan Spieth.

Even more ironic is the shot in question was part of a bogey hole at 13. But that's because it could've been a disaster instead.

Here's what he was trying to negotiate: the 13th has a fairway that looks like it survived a bombing run:

Dude's shot was headed where angels already feared to tread, but incredibly, it could've been worse:

So, Spieth was left to tour more Southport countryside than he'd ever imagined.

How far right of the fairway was that dude standing? He was watching the action on another hole.

And here's where the genius genes kicked in, those parts of the DNA that the truly gifted have and -- according to Dr Evil -- the insane lament..

It took three tournament judges and 29 minutes to determine where Spieth would take the penalty drop. They finally ruled that between the TV trucks on the practice range -- 70 yards from his original shot -- would be acceptable.

Part of knowledge is knowing where to look for answers. For Spieth, that meant a chat with his caddy, Michael Greller.

Fortunately for him, he took the advice, spurning his 3-wood for a 3-iron.

The 23-year-old Texan knocked it up and down from there, saving the bogey and who-knows-how-many strokes.

Had he gone with the 3-wood, Spieth would have needed more than his looper to rescue him from total collapse. The ultimate landing areas would've been killer. Meanwhile, Kuchar had no choice but to sit on his bag and munch on snacks, effectively cooling his jets. How it affected his game is anyone's guess and will be; he's too classy to say either way.

Frankly, Kuchar had a solid round, but that was no match for the reinforced confidence and momentum of the only golfer besides Jack Nicklaus to claim three majors before his 24th birthday.

Spieth followed his escape at 13 by going into super-human mode.

The first Open took place back in 1860, when Abraham Lincoln's election as president catalyzed the American Civil War.

There have been legions of historic holes played that led to a champion's crowning, and this may have been the first where a bogey becomes the stuff of legends.

He'll clearly have a chance for more, but they're gonna have to be spectacular.

Don't bet against it.