Sergio Wins the Masters in the Here and Now 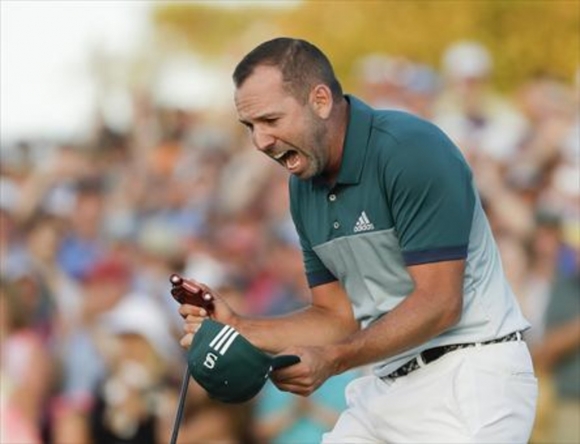 Here's a major tournament that's true to its word.

The Masters actually is a tradition like no other.

The old ways die hard. It was only five years ago that the Augusta Country Club accepted women members.

However, they still don't want no stinkin' mobile phones.

That explains the crowd roar at the 18th green when that humongous Masters scoreboard posted numbers showing Sergio Garcia and Justin Rose were heading to the tourney's 72nd hole all square.

But it doesn't explain this dude in the background discreetly hiding behind his smartphone:

May his golf game be cursed with an infinite number of quadruple-bogeys, not for clever smuggling, but for what it symbolized.

More on that in a moment.

Let's first take a look at the final round and playoff hole that bestowed the globe's only stylish green jacket upon Sergio García:

Yes, the term putting for dough is a traditional saying, and as those two showed, it's accurate.

But the real drama was in the way García and Rose bounced all over the fairways, and in one instance, beyond. That's when the Spaniard found himself outta bounds on the 13th fairway, taking a stroke, a drop, and a shot.

Enter the video nazis, belatedly, as is their wont. Here's the evidence that García cheated when he cleared away a pine needle or two around the ball:

Check the markings on the ball for a frame of reference.

Some pedantic bastards would say this proves a violation of Golf Rule 18-2, which states that the Lord himself will smite you roundly for defying the very laws of nature that condemned John Calvin to a life of everlasting constipation.

Fortunately, the Masters officials adhered to their tradition like no other and essentially told the nitpickers to stuff it.

No appreciable advantage was gained, and the title was decided by humans being human, rising to the occasion, with García elevating a tad higher.

Which means Sergio's no doubt still partying like it's 1999.

Video technology will survive, but we're reminded yet again that they're only the tools. Their operators are the masters.

And ever it shall be. Unless the Terminator and Matrix ever get together.

But be diligent, dudes in red shirts. For once. And that means you, dude, in that tweet above.