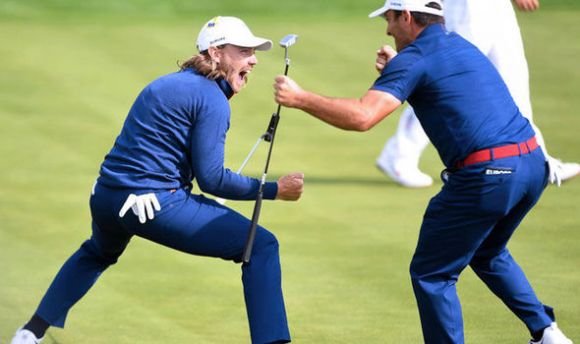 Beyond doubt, the most raucous party in professional golf roared into France and by the first day's end, Team Europe was roaring with it.

Le Golf National near Paris and its Albatros course may still be wondering what just hit it.

What the massive batch of revelers witnessed was a fierce afternoon comeback by the Europeans, erasing a morning fourball deficit by sweeping the afternoon foursome sesson to take a 5-3 first-day lead.

Anyone on the local 18 who's ever done a weekend scramble with a beer cart nearby is likely well aware of the Ryder Cup format's team portion.

But, just in case, here's a refresher:

Team USA won the Cup in 2016 on home turf and came outta the clubhouse looking like defending champs in the morning fourballs.

Tony Finau had the hot hand in the day's first pairing, combining skill ...

Tony Finau with the first chip in for eagle. Is that good? pic.twitter.com/OjeMRK6qxM

... with an incredible touch of luck, compliments of a square hit on the 16th's water hazard support wall.

Dude could be there for the rest of his life and never do this again:

The Americans were actually headed for a sweep, as in-form Tiger Woods and Masters titlist Patrick Reed were leading at the turn when British Open champ Francesco Molinari and young gun Tommy Fleetwood went on a red-number rampage:

The afternoon foursomes were a total script-flipper.

No match even made it to the 17th hole.

Europe's dominance in this session was underscored when Rory McIlroy pulled his own bitta magic:

While the Euro duo were seven up after nine -- carding four birds in five holes -- Mickelson couldn't find the same fortune as Finau:

Dudes proved him right by shutting the door in this session by crushing Jordan Spieth and Justin Thomas.

Fourball and foursomes are on the docket again for Day 2.

What Bjørn's gotta consider is getting his entire team some action so they won't be thrown cold into Sunday's singles, where the Cup is almost always decided.

As to American captain Jim Furyk, maybe he should bring Scarlett O'Hara in for a motivational talk: