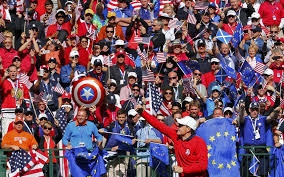 Used to be the USA dominated Great Britain & Ireland in Ryder Cup competition.

Since its inception in 1927 as one of those country club challenges, the Americans bested the Isles' linksters all but three times -- plus one draw -- through 1983. So it was no wonder the sporting public yawned at the coverage in those days.

By then, the British and Irish had brought along a few friends. Golfers from continental Europe joined the team in 1979.

And they got their breakthrough in 1985 at the famous Belfry in the English midlands. How big a deal was it? Clearly, the BBC felt it was an achievement to be savored far longer than a video clip. So, grab enough adult beverages to last the length of a documentary and settle in:

Including that triumph, the Europeans have claimed 8 of 12 events, with one draw. Their 2012 comeback in Chicago was also the stuff of history.

This year, the Cup will be hosted at Gleneagles in Scotland.

But this is also the time to think ahead. As in where in Europe the 2022 event will be staged.

The Ukraine is out. Especially if it isn't the Ukraine by then. No wonder it didn't submit a bid.

However, a record seven nations did.

Germany, Portugal, and Spain were predictable suitors. Italy has had its moments in links history. Denmark has Tomas Bjørn now, but not then. But Austria? Beautiful scenery And Turkey? Flush economy. It's also where ICBMs were removed by order of President Kennedy to help diffuse the Cuban Missile Crisis in 1962.

Come to think of it, many of President Putin's billionaire buddies are now golf freaks. Granted, the game does have a 'ways to go to catch on with the public in general, but strides are being made:

But it's Putin's private circles that call the shots. Maybe it is the status of owning a country club, something Westerners can appreciate. Maybe they're amused by the slang, like a Hitler meaning two shots in the bunker.

Whatever the reason, maybe golf's poobahs can help keep the Russian bear at bay for a while. The Sochi Olympics kept Putin's forces out of the Crimea for a while. He'll have to tread lightly -- much more lightly than now -- to keep the 2018 World Cup within reasonable borders.

So maybe if, say, golf pulls Turkey's application and substitutes Russia's instead, the world might avoid what could be called a Club-and-Missile crisis for a while longer.

For now, and Belgian claims aside, it's re-assuring to see the Ryder Cup return to the game's source in a month's time, a peaceful place where all is right with the world. Referendums aside.