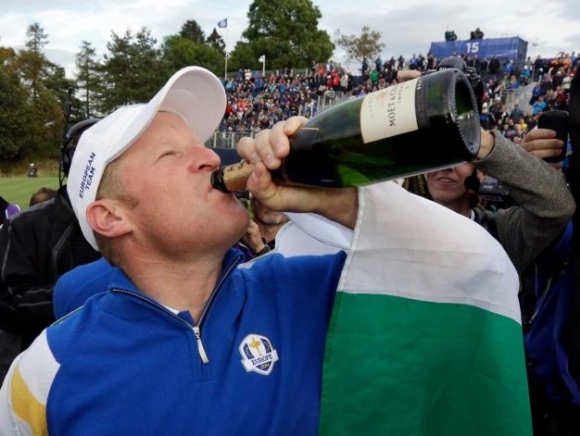 A 38-year-old Welshman who doctors advised to bag golf a decade ago sealed the deal as Europe cruised to a 16½-11½ pasting of the USA to retain the Ryder Cup for another two years.

Not only did James Donaldson overcome the odds to continue his career, he had to squeeze into James McGinley's squad as the last captain's selection with a strong late-season finish in Prague.

Against this backdrop, and with the Euros needing a half-point to secure the Cup, Donaldson stepped up to the moment and prepared for what he called the shot of his life:

American golfers are left to wonder why yet again. However, that musing won't extend to the play or attitude of spirited Georgia Bulldog Patrick Reed. Even in Team USA's darkest hour, the Ryder rookie stirred embers of iconic defiance:

Yesterday, Reed rimmed a two-footer to halve a hole in foursomes and didn't bother to hide his emotions.

It set him up for a taunt as he checked his line on a birdie putt today. Reed then calmly rolled it in and then gave his response:

Predictably, that went over like a fart in church.

Reed did a better job of controlling his temper on the final than Jordan Spieth, whose frustration spilled over into a loss in the first pairing of the day. But these two should form the core of America's challengers in 2016. Ricky Fowler will likely be there, but he needs to learn how to gain stamina in such a unique golfing event as this.

Elsewhere, sidebars were evident in the singles. Lineups are presented simultaneously, so the coincidence of Martin Kaymer and Bubba Watson meeting stirred memories of Kaymer's hex stemming from the 2009 PGA playoff. No love was lost between Sergio Garcia an Jim Furyk. Webb Simpson was determined not to get steamrollered by Ian Poulter again.

The geeks in Ryder Cup officialdom scanned data to claim an attendance aggregate of around 250,000 spectators from 96 for the five sessions at Gleneagles.

They all realize this is their chance to act like no other golf gallery can, and they do.