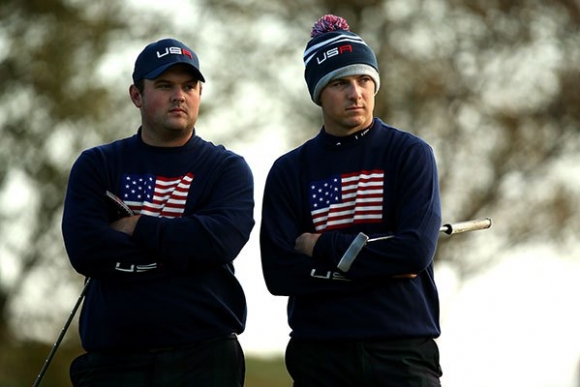 With two days of Ryder Cup action now in the books, this year's hosts have doubled their lead.

Look no further than the foursomes competiton. The Europeans dominated it yesterday, winning 3½ of 4 possible points. That feat was duplicated today.

So what is it about foursomes that the Euros can command a 7-1 advantage? Could it be the more modest off-course arrangements of their pro tour? Where American pros spend more time with their posses on the road, the Europeans are known for travelling together and even dining together throughout the season.

Maybe it's just their way.

USA coach Tom Watson admitted Cup rookies Jordan Spieth and Patrick Reed were "visibly upset" about being dropped from yesterday's afternoon foursome lineup. Watson took heat for the decision, and this morning, the pair were determined to prove their point. They didn't waste any time in doing so.

Spieth and Reed's show of intensity was reminiscent of the riveting focus Ian Poulter displayed when he led the Euro-charge at Medinah in 2012. The Englishman's game had been silent on Friday, but his flair for the dramatic showed signs of returning during the fourball:

It was emblematic of this match being halved, as Ricky Fowler had holed in earlier:

Spieth and Reed were the Americans' only saving grace during the day's second 18 holes. Yet, even they blew a half-point when Reed rimmed a two-footer that wouldn've won the match at the 17th.

Perhaps a factor in the alternating-shot foursomes is the European players were simply better at shaping shots to their partners' strengths. If so, then it's good to have buddies.

Sunday sees a shift to singles matches, where the Americans to be more comfortable. Couldn't tell that from Medinah two years ago, but if they're looking for a mental boost, maybe that will be it. Here's the lineup:

Both teams are determined to make a fast start. Spieth and Reed lead off for the USA, while the European wheelhouse of Stenson, McIlroy, and Rose are stacked in the early going, as well. If the Americans can take play down to the wire, look for Jimmy Walker and Victor Dubuisson to provide the drama.

Just know that, in a setting seen only at Ryder Cup venues, from the first tee onward, the home team has lotsa buddies.