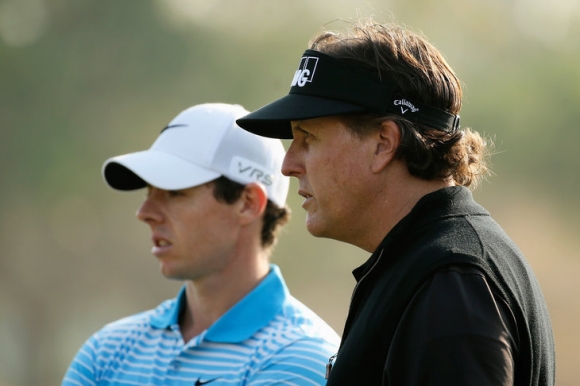 This is the competition that converts onlookers into golf fans.

There's a home crowd advantage. They cheer and chant. Loudly and often.

It's match play in a team format.

And the players' performances will stay with them for at least two years. Often forever.

Tom Watson is answering a host of tough questions after the first day's play, and rightly so. Gleneagles is not a course for the long-range bombers like Bubba Watson and a 44-year-old Phil Mickelson. The former needed more cover from a partner than Webb Simpson could provide in fourball. Watson was shelved for foursomes, and Mickelson should have been, too.

First, here's a review of the Ryder Cup format:

► Friday and Saturday feature four four-ball and foursome matches on each day.

Coaching decisions are huge. Only eight players per team are selected for each session on the first two days, and a lineup is submitted on Sunday, just as baseball managers do.

Gleneagles is in Perthshire, north of Edinburgh. It's latitude is just above 56º. For frame of reference, Edmonton sits just above the 53rd parallel. It can be a bit chilly in late September. It's also a time of year when Scottish winds feels no need to be hospitable.

It's the sort of environment where Phil Mickelson's arthritis makes itself felt. He wasn't up for 36 holes in those conditions today, fading fast in the afternoon -- erratic shots buried his pair's chances -- and announced he won't be available for selection on Saturday.

The stunner here was Ian Poulter's total collapse. He'd not lost a Ryder Cup match prior to this. Jordan Spieth and Patrick Reed showed no rookie effects at all, commanding their match.

McIlroy popped a rising 34-footer to halve the 17th, as he and Garcia birdied the final three holes to salvage a half that severely damaged the American position going into Saturday's play.

Earlier, the Spaniard had the shot of the day, on the fourth hole:

The obvious move for Tom Watson was to re-insert Reed and Spieth. The Euros have wisely given Garcia a rest and are counting on Poulter to regain his confidence under McIlroy's cover.

The Ryder Cup puts 28 points on the table. Europe needs 14 to keep it; thus, the USA must earn 14½ to wrest it away. Lessons learned today will weight heavily tomorrow. And possibly forever.