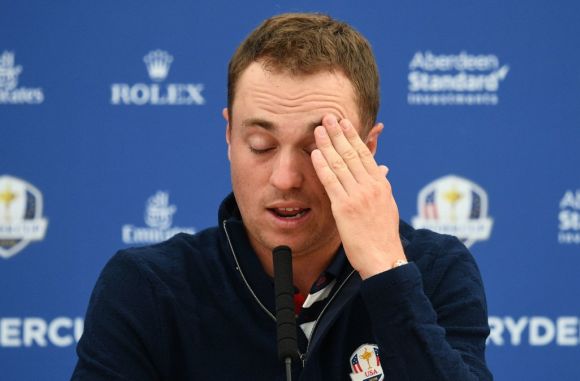 Clearly, Rick Reilly won't be satisfied until everyone in the room is uncomfortable.

This noble quest continued at the 2018 Ryder Cup, where his opening salvo to Justin Thomas was a real doozy.

We must warn you that the following wit is quite sharp, so try not to slice yourself open:

That was insanely awkward, with Thomas looking almost frightened, as he was probably wondering whether dude had completely snapped.

Apparently, Reilly was referencing the fact that Thomas's old man, a golf pro in Kentucky, is keeping a diary about his boy's Ryder Cup experience for the prestigious Louisville Courier Journal.

But still, this complete hack of a sportswriter might want to work on his phrasing.

The Americans didn't fare very well on the first day of the Ryder Cup, getting swept, including the dynamic duo of Thomas and Jordan Spieth.

We can only draw one conclusion here.

Rick Reilly is in Thomas' head and the Americans are doomed.