Phil Mickelson Dressed for Success on the Course 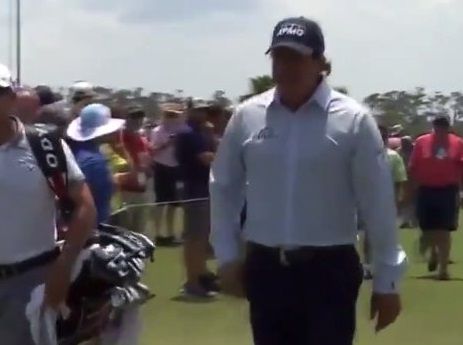 Phil Mickelson is an interesting dude.

The Players Championship began on Thursday, and Lefty was out there as per usual.

However, his wardrobe raised more than a few eyebrows.

Phil decided to sport a long sleeved, buttoned down dress shirt for the first round.

85 degrees but Phil Mickelson out there in a long sleeve button down shirt pic.twitter.com/uFJ0AljtxK

That shirt looks completely absurd on a golf course, but Phil somehow makes it work.

And why would he wear such a thing, particularly on a scorching hot day in Florida?

It seems Phil has inked an endorsement deal with a company called Mizzen+Main, which apparently gives him a stake in the company along with some mad loot.

Our favorite PGA tour insider trading enthusiast is really endorsing the hell out of these dressy performance shirts, going on and on about being able to wear them at a meeting and then play a round of golf without changing.

Phil looks like a guy who’s gonna check my place for termites and then give me a detailed estimate.
(I’m his 5th stop of the day) pic.twitter.com/3hliNYzHz9

Indeed. That is one high performance shirt, although Lefty did miss the cut.

Never mind that Phil must have been pouring sweat into that thing.