Phil Mickelson Briefly Loses His Mind at US Open 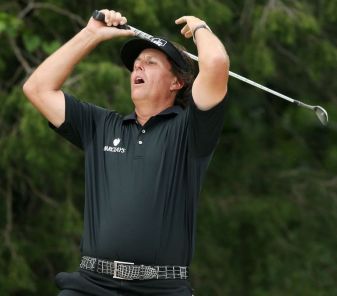 The 2018 US Open is turning into quite the spectacle.

The course and elements have conspired to completely eviscerate the field, causing much frustration and angst.

Sadly, the always well-dressed Phil Mickelson is one such victim, and his resulting frustration produced a surreal response.

Lefty was attempting to negotiate the brutal 13th hole when this happened:

This isn't the sort of thing you're expecting to see at a major tournament -- or even a local Par 3 -- but it actually did occur.

You can even hear a mixture of nervous giggling and gasping from the gallery, as they were caught completely off-guard by these shenanigans.

While this seemed like a simple case of temporary insanity caused by the rigors of playing the hellscape that is Shinnecock Hills, the plot thickened when Phil attempted to explain his actions afterwards:

If this is in fact true, then Mickelson could very well be a genius.

He couldn't have possibly thought of this as the putt was rolling off the green, so he may have already considered this scenario beforehand.

Of course, the irony of Phil behaving like a petulant child on his 48th birthday wasn't lost on many at the scene.

Even with this scandalous breach of sacred golf etiquette, the birthday boy still posted a nasty 10 on the hole in question, on his way to a not-so-happy 81.