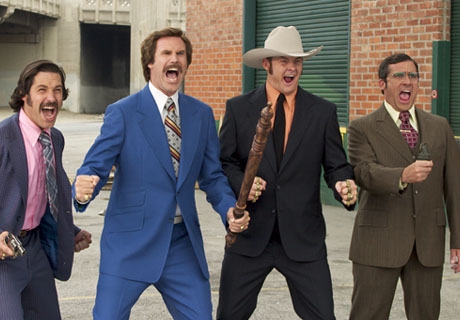 The film Anchorman continues to permeate our pop culture subconscious and has now somehow made its way onto the PGA Tour.

Morgan Hoffmann, a moderately successful golfer who turned pro in 2011, decided to pay tribute to all things Burgundy at a tour stop this weekend in San Diego.

Hoffmann went to the trouble of adorning three of his wedges with quotes from the film. Anchorman is one of the more quotable films you will find, so there was certainly plenty of material available.

Of course, the city of San Diego is now irreversibly linked to Anchorman and the character of Ron Burgundy, and this is certainly not a bad thing. However, with the release of the sequel recently, there has been a relentless barrage of media coverage devoted to the film, and the Channel 4 news team has been seemingly everywhere.

Will Ferrell and his alter ego have co-anchored a newscast in North Dakota, pimped Dodge Durangos on network television, and interviewed Peyton Manning. Again, these things are quite amusing taken alone, but when combined with months of oversaturation, it all becomes a bit much.

Anyway, Hoffmann currently finds himself in fourth place at the Farmers Insurance Open in lovely San Diego, which of course, in German, means a whale’s vagina.

I just hope he doesn’t finish in dead place. Wink.