Morikawa Does a Yogi, Tops Thomas in Playoff at Jack's Place 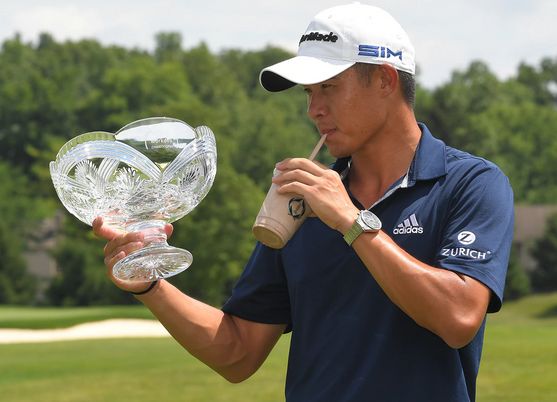 When someone calmly drops a 24-foot putt after his opponent drains a 50-footer on a playoff hole, it's a clue dude's not gonna be denied.

When someone else blows a three-shot lead on the tournaments final three holes in regulation, it's a clue he is.

Yogi Berra famously said it, Justin Thomas just learned it the hard way, and CalBear Collin Morikawa's kinda glad about it as he ...

Dude picked off the Barracuda last summer, which uses the Modified Stableford scoring format, so this victory is his first under normal stroke play.

Either way, they both count, and they give him the distinction of being the first dude since Tiger Woods to win two events as a pro before missing two cuts.

Morikawa did it by grinding away, waiting for an opening, and when Thomas gave it to him, he took it. Eventually. Canning a five-foot par putt on 15 put him in position, and despite only one bird over the final three holes, there he was.

Both Morikawa and Thomas came out blazing in the final round, with Morikawa gaining an edge in the highlight department:

SO CLOSE to a hole-in-one. 😱@Collin_Morikawa nearly makes a 1.#QuickHits pic.twitter.com/BOdJ5VO7mf

When Thomas wrapped up the round by going bogey-par-bogey to Morikawa's par-birdie-par, his three-stoke lead had gone the way of the dodo bird just like that.

And so it went to the playoff, but not before Morikawa's tap-in on the 18th to make it so did a lap around the cup first.

Getting there was half the fun, for Morikawa, at least:

This was the first of a sorta doubleheader at Jack's Place, a result of the PGA Tour's revised schedule due to the wackiness of pro sports in these infected times. The biggie follows: That'd be the prestigious Memorial, hosted by the Golden Bear hissownself.

Rest assured that Muirfield Village course is gonna be set up to provide more thrills and spills than it was this weekend.

Still, Morikawa and Thomas provided enough drama to make the Workday one of the re-start's more entertaining events to date.

But let's see what they do when the course takes over. Because it will.