Mickelson Loosens Grip on Throat, Tightens It on Claret Jug 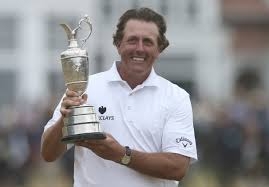 The reigning gunslinger in golf is definitely Phil Mickelson.

He's never met a challenge he'd refuse, even when it isn't there.

In the final round of this year's British Open, though, the task was stiff. He began the day five strokes off the pace at rugged Muirfield, nestled alongside Scotland's rustic Firth of Forth, site of the extended arm of the famous Hadrian's Wall. And as this barrier defended the Roman Empire from Celtic tribes to the north, Muirfield and the firth's elements conspired to repel all those on the course who aspired to break par.

Only a handful managed to do it, but their achievement was without the pressure of winning a championship.

Mickelson, on the other hand, smashed par with a superlative round -- considering the elements, the course, and the stakes -- of 66, a five-under effort that, in the words of an amazed Zach Johnson, "I didn't know was ... out there."

The tall left-hander spent most of The Open hanging around, but found his opportunity on Sunday's back nine. Leader Lee Westwood was sputtering, and the pack immediately behind him was only treading water. So when Mickelson canned a birdie putt after a near-perfect five-iron to the green on the par-3 13th hole and followed with a birdie on 14, the charge was on.

As he always seems to do, Mickelson flirted with disaster on the way in. This round, however, was deemed by the golf gods to be magical; he barely avoided dungeon-like bunkers with fortuitous bounces on this unpredictable array of links, and one of  his three-woods to the green on 18 was one such beneficiary. As a result, Mickelson sank a short putt for the birdie, which all but sealed the deal.

He merely had to wait for the field to play out before he could claim his historic prize.

This victory was quite a reversal of fortune from a month ago, when Mickelson freestyled away a US Open title yet again. One would think after six runner-up finishes, he'd accept that there's a time and a place for daring shots. The legendary Arnold Palmer had a knack for it, and almost single-handedly made the PGA Tour a marketable commodity for television. But he's the King and only deployed drama when there was an absolute need for it.

It was Palmer, in fact, who advocated that the modern Grand Slam of golf should combine the British Open and PGA Championship with the Masters and US Open -- thus dropping the by-then overshadowed two major amateur championships -- to create what, since then, has been the holy grail of the game: winning all four events in the same year.

To date, no one has done it. Tiger Woods has held all four titles at the same time, but two came in 2000 and the other two in 2001. Only five have won all four titles during their career: Gene Sarazen, Ben Hogan, Gary Player, Jack Nicklaus, and Woods.

Mickelson now only needs to find a way to overcome his tribulations at the US Open to join that illustrious group.

Which means he's got to find a way not to beat himself. He seems to be improving.