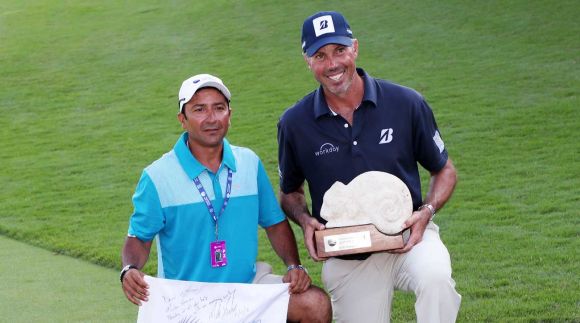 We can only hope that the beleagured Matt Kuchar has learned some sort of lesson from the past few months.

The equal parts wealthy and miserly PGA Tour pro has been in the public crosshairs ever since a most unfortunate incident in Mexico last November.

After winning something called the Mayakoba Classic and collecting the nearly $1.3million in prize money, our generous hero to the working class paid out his caddie to the tune of five grand.

The caddie in question was a local Mexican fellow by the name of David Giral Ortiz, also known as El Tucan for whatever reason.

Dude had replaced Kuchar's regular caddie for the tournament and received the big stiffy for his troubles.

While tipping etiquette can be flummoxing at times, it's quite clear that Kuchar was being really cheap and awful.

He then made things much worse by defending the meager payment afterwards.

Matt Kuchar confirmed Wednesday that he did pay his Mayakoba caddie $5,000 and defended the payment as "fair and good."

Sir, you are way out of line.

But after being publicly crucified over the affair, Matty has apparently seen the light and apologized, giving El Tucan another $45K.

Perhaps it had something to do with this chilly reception at this week's Genesis Open.

Anyway, if only for appearances sake, it's probably best for any obscenely rich professional athlete not to put themselves in such a position, regardless of their personal philosophy.