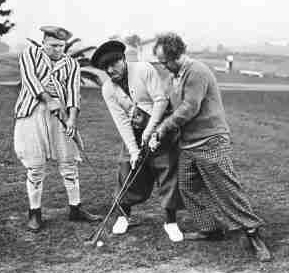 When your the PGA Tour Player of the Year, what do you do for a coda?

After all, we're still in the same year.

The Tour's American events are completed, of course, but Justin Thomas just keeps racking up those appearance fees elsewhere in the world.

This includes the CJ Cup on Jeju Island, which is about as south in South Korea as you can get.

Fear not. There are also 19th holes there, some of which are nowhere near the 18th hole.

It's a cool place to do cool stuff, and Thomas apparently got into that sorta mode.

For example, here he is in the first round, noticing a tuft of turf keeping his lie from smooth sailing to the hole three feet away. No problem.

Back in the day, duffers simply pulled out a wedge and stroked a stymie like this:

The actual stymie was golf's version of being snookered. The PGA and Royal & Ancient agreed to abolish it in 1952, allowing balls to be marked on the green if they were obstructing a  line.

With that jaunt down memory lane in the books, Thomas had an occasion the next day to honor one of cinema's tributes to street linksters.

Dude put a faux Happy Gilmore drive out there 461 yards.

He took a baseball-type swing outta frustration when he saw it heading toward the right rough. Little did he know there was a friendly cart path awaiting down there:

Yes, physics geeks will confirm the cart path served as a cross between a basketball backboard and a baseball bat.

It's one way to help make a bird on the 12th hole at Nine Bridges Golf Club on Jeju Island.

But he's still got a 'ways to go to top Happy Gilmore.

Or a good special effects team and a funky soundtrack.