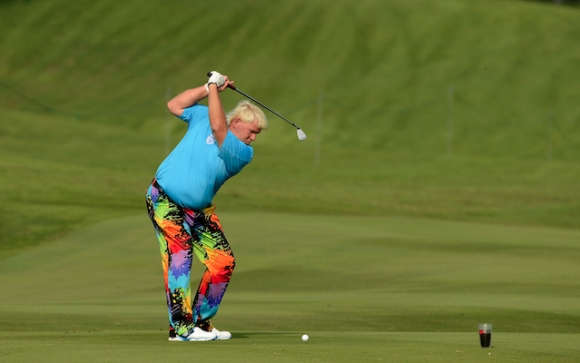 John Daly has always been a fascinating character study, both in terms of his golf career and personal demons.

In a recent interview with The Guardian, Daly revealed he has not had any alcohol in close to six years, which is certainly good to hear. However, his personality demands excessive consumption, so the colorful golfer is still pounding cigarettes and soft drinks at a prolific rate.

Here is Daly describing his relationship with his favorite beverage, Diet Coke:

"I still drink that but not nearly as much as I used to. The band won't allow me to drink as many. If I don't have ice, I can't drink it. I can't have it straight because of the carbonation. I have to drink it slowly and not out of a can, I need some ice. I used to have 26-28 cans a day. Now I have 10-12 at the most."

The thought of consuming even a dozen Diet Cokes in one waking day is distressing, let alone 26-28. Daly is also maintaining a two pack a day cigarette habit, but again, the alternative is much worse.

Daly is well aware of the damage his various addictions -- from alcohol to gambling -- have wrought on his life and career. He acknowledges his mistakes and has been working hard to curtail his obsessions while getting his golf game back on track.

The soon-to-be 48-year-old has entered five tournaments so far in the 2014 PGA season, and the results have been a mixed bag, from a 32nd-place finish at the Sony Open in Hawaii to a second round 90 at the Valspar Championship, which represents his worst ever score on the PGA Tour.

Daly recently made his annual pilgrimage down to Augusta to peddle his wares outside the local Hooters. Daly hasn’t played at the Masters since 2006, but his traveling road show is infinitely more entertaining. Personally, I would be down for some autographed John Daly memorabilia.

John Daly at his merchandise bus in Augusta: pic.twitter.com/PGFnJGUuNa

There are plenty of folks who root for John Daly, myself included. His very human frailty and struggles with addiction make him more relatable than the average athlete, and he seems to connect with people on that level.

I, for one, hope he can keep those demons at bay, one Diet Coke at a time.