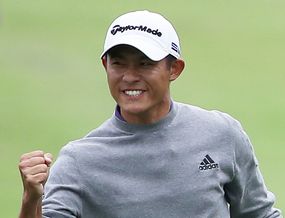 If anyone in the PGA's esteemed field knew the 16th hole at San Francisco's TPC Harding Park, it was a local who'd played it a dozen times or so to keep his college game sharp.

And Collin Morikawa knew not to get greedy there.

That's because dude knew when to do so. Like in the PGA Championsip's final round when something had to be done to break away from the pack.

Morikawa noted earlier in the week that the tee had been moved up for the tournament, serving as Harding Park's version of Sirens luring ships to their destruction onto the rocks or Scylla.

Or maybe just turning those who are tempted into frogs ...

Here's the hole, which was played at 336 yards for the tournament:

Note the subtlety of the bend, partially obscuring it from the tee, as well as the jutting trees and sand trap that guards it against such attempts.

Those were the challenges as Morikawa rose to the occasion:

Dude canned the 7ft putt for the eagle, which is much more majestic than a frog.

And that sealed the deal.

His 267-pop total was good for 13-under and a two-shot cushion over runners-up Paul Casey and Dustin Johnson, the latter of whom couldn't keep himself on the fairway enough to protect his lead after three rounds.

Dude did hold an edge over defending two-times-straight PGA titlist Brooks Koepka, though. After spouting a bitta golf-smack aimed at Johnson in particular that he'd won more majors than all the other leaders combined, Koepka proceeded to lay an egg on the final day.

He teed off in fourth place -- two shots behind Johnson's -9 after movind day -- but suffered his worst-ever round in a major 74 to check in at No 29 on the leaderboard.

At least Koepka joined the crew in the weekend's highlight reel:

Morikawa may have been well familiar with the course, but he still had a tad to learn about the Wanamaker Trophy:

No harm, no foul.

Dude still had a stroke to play with, anyway.