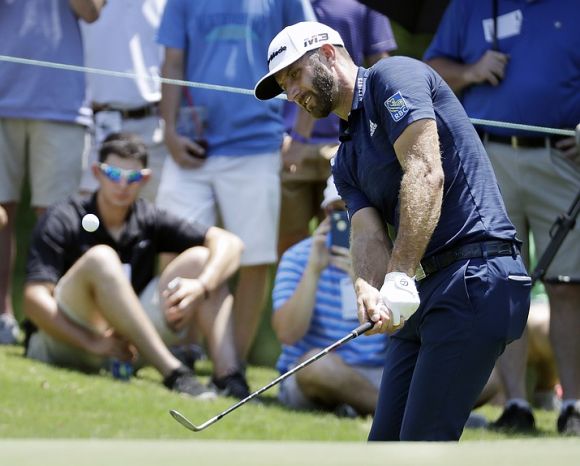 Around this time last year, Dustin Johnson had to be wondering if he was doing a David Duval.

After so much success, dude missed the Memorial's cut.

The 6-4 Johnson did pick up a playoff win at The Northern Trust and an eighth-place paycheck at the Canadian Open, but other than that, one of the game's best was struggling.

Santa must've been kind at Christmas. Sharing is caring.

2018's found Johnson back in form. In his 13 events to date, dude's registered a Top Ten finish in seven of them.

That included a January victory at the Tour of Champions.

Now, he's picked up a second seven-figure check by cashing out six pops ahead of Andrew Putnam at the St Jude's Classic:

It's what separates the pros from the amateurs.

More impressively, though, Johnson was a full ten strokes ahead of the rest of the field.

It's easy to see why. Dude knows how to hold a lead.

Having erased -- or at least mitigated -- one bad memory, the World No 1 will now go for the double at Shinnecock Hills to wipe out the other.

If only it was this easy.

There are only two par-5s, so controlling drives and holding a lead will be huge.

With the return of Johnson's confidence, dude's got a shot.