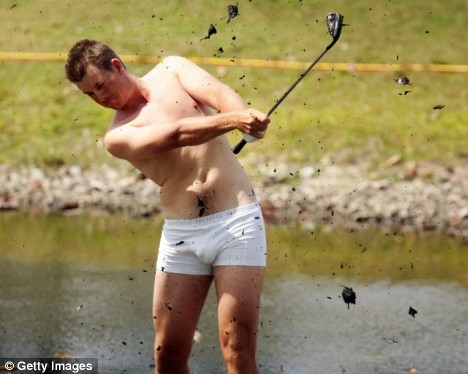 For a golfer who has banked $20million in earnings this season, Henrik Stenson seemed unusually concerned about winning a $100 bet.

Pride will do that.

The tall Swede, who had sunk as low as No 230 in the world rankings as recently as early 2012, has culminated an incredible climb back to such an elite status where Ian Poulter has proclaimed him to be "the best golfer on the planet."

It was Poulter who had to pay up on the bet.

The wager was over who would finish higher on the money list. Poulter had a good run, but when Stenson carded a final-round 64 to cap a 25-under-par performance at the DP World Tour Championship in Dubai, the bet went to the man who became the first golfer to claim the EuroTour's Race to Dubai and the PGA circuit's FedEx Cup in the same year.

Stenson, whose on-course demeanor often resembled that of his Viking berserker ancestors more than the modern-day Nordic image of suave reserve, has seemingly conquered those demons with a fortified resolve to keep his mental game on point. This newfound focus was probably also a result of his being one of the many victims swindled by Ponzi-scheme banker Allen Stanford, now serving 110 years in federal prison. Stenson lost millions.

Fortunately for his financial future, the 37-year-old still had the talent, and once he got his head together, the rest of his body followed. It enabled him to pull clutch shots out of his repertoire like this final round gem on the 17th hole that secured the Deutsche Bank Championship:

Stenson's triumph in Dubai advanced him to the third spot in golf's world rankings. He'll have a winter to prepare for the 2014 campaign that tees off in January, and if he stays true to form, he'll be odds-on to dislodge Tiger Woods as No 1.

Just don't expect Poulter to be making that bet.