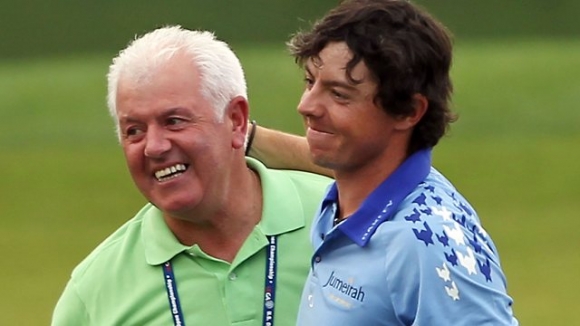 25-year-old Ulsterman Rory McIlroy joined Jack Niclaus (23) and Tiger Woods (24) as the only golfers in the Grand Slam era (1934 onward) to claim The Openat the tender age of 25 or younger.

But he's got the only dad who went to the till to put his dosh where his kid's future was. The Hoylake Golf Links at Royal Liverpool offered few obstacles for McIlroy in the final round, and those that appeared weren't enough to re-claim the seven strokes that separated him from his closest pursuers. Sergio Garcia displayed the mercurial form that puts second place as his ceiling at majors, and Rickie Fowler -- resplendent in Oklahoma State colors and a cap that looks like someone stole it from the mall for him -- couldn't leverage his final-round pairing with the leader to muster a match-play atmosphere.

So, while Rory gets his name engraved on the famous claret jug, dad Gerry and his mates get to decide how to spend their personal shares -- $85,400 each -- of the winning ticket.

But it's the belief 10 years ago that counts.