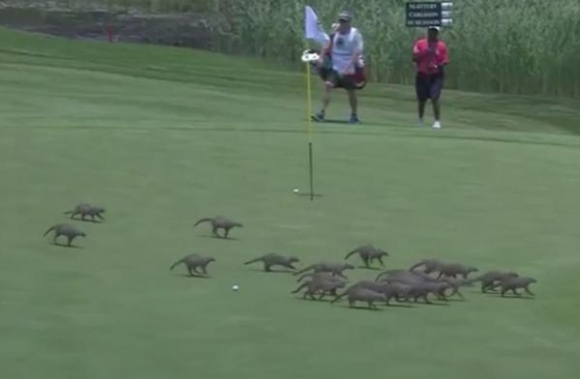 Well, you don't see this every day.

Golf is a unique sport in that animals will occasionally get involved. The type in question depends on the location of the tournament.

Something called the Nedbank Golf Challenge in South Africa was rudely delayed recently by a pack of mongooses.

This isn't terribly surprising, considering that the Gary Player Country Club happens to be located next to a large wild game reserve.

Despite the fact these snake-eating brutes decided to charge the green, they somehow managed to avoid contact with the ball, even though they appeared to run right over it. Then again, a ball doesn't look like a snake.

It's interesting to note that the mongooses passed on the traditional foursome in favor of a 20-something.

Animals have been disrupting golf tournaments since the beginning of time, but it never seems to get old.

Of course, gophers are considered the more standard menace on a golf course.

Also, you need to find just the right man to dispose of these varmint.