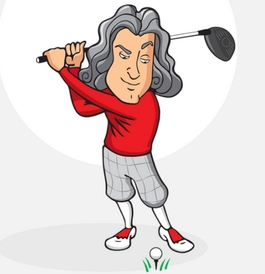 The Scots claim it as their own, mainly because they 'invented' the hole.

Fans and opponents are supposed to remain quiet during the action, even though players in other sports need to concentrate as intensely as golfers.

And it's the only sport where players call infractions on themselves.

However, sometimes one's word in a game of honor just isn't enough.

So, how did that ball move?

And why did it take so damn long to make a ruling, docking the eventual US Open winner a stroke for his alleged transgression?

Here's a theory: the poobahs in charge of such things dissected every frame of Dustin Johnson's approach on that putt at the fifth hole and came up with taking Newton's Law of Universal Gravitation into account.

Face it. That would explain why it took the rest of the round to make a ruling. Dudes had to rustle up a calculator that could handle that sort of math.

Johnson's putter never came near the ground. That should've blown out Rule 18.2, except for gravitational pull.

And who was holding the metal mass that attracted a 1.62oz/45.93g ball on an ultrafast putting surface?

That was a bastion of integrity by comparison.

Thankfully, golf wasn't around then. Neither was Newton.

Fortunately, Johnson put max distance between the ball and his clubs everywhere else in the tournament. The final hole was no exception, especially when he could concentrate in hallowed silence:

As if their challenge isn't tough enough, they're on notice that an anti-gravity putter wouldn't go amiss.