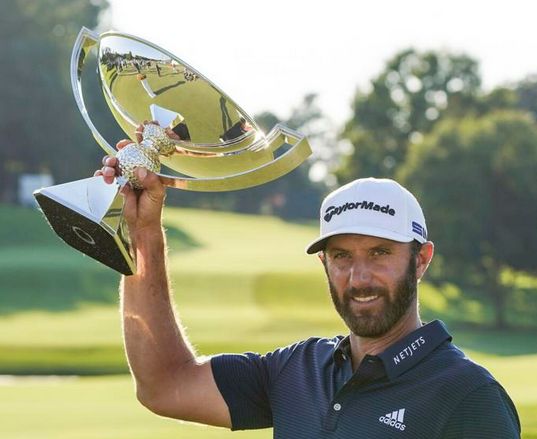 Full marks to the PGA Tour for making achievement over the long haul actually mean something.

Fuller marks to Dustin Johnson for making it pay off.

The FedEx Cup features a staggered-start system for its championship weekend at East Lake Golf Club, It's the least the Tour can do to reward a player who's slogged through the season, racking up performance points that, for once, outranks money earnings in priority.

The staggered start format isn't without a legion of vocal detractors, but hell, in a sport where a 64-player match play bracket can come down to a missed 6-foot putt or a made 30-footer determine Player No 64's fate against Player No 1 -- and so on -- it does negate the effect of any random dude getting hot over four days and scarfing the $15million first-place paycheck after a decent season and nothing more.

Everyone knew the system well in advance, though, and here's how the Championship's Top Five began the proceedings: Because of this, after the first round went into the books on Thursday, Johnson and Rahm may have been the co-leaders at 13-under, but they didn't shoot 57s to earn that score.

By Sunday, the former Chanticleer was holding one of the few trophies he'd yet to earn in his career by doing what he had to do. This is not to be underestimated at East Lake, either, but dude betrayed his nerves with that trademark calm demeanor and went about his business:

However, the 2017 Rookie of the Year entered the championship tied for 11th in the FedEx points standings, which meant he began proceedings at 3-under, seven pops behind Johnson, whose 67-70-64-68=269 was too much to overcome.

Instead, his day's pressure came down to holing a birdie putt on 18 that was worth $500,000 more to him if he finished alone in the No 2 FedEx Cup spot. However, dude missed and shared second with Justin Thomas. They each took home $4.5million, which was still cause for drinks all around.

For the record, Scottie Scheffler also had a lower weekend score than Johnson -- 71-66-66-65=268 -- but he came into the weekend tied for 16th in the FedEx standings, which was only good for a 2-under head start.

Thus, he knew from the jump that he was only here for the beer, anyway.

That and a $2.5million direct deposit added to his annual income, of course.

Again, though, Johnson earned his 10 strokes and defended them well over the course of the weekend:

Now, with that $15million first-prize money secured, his name will be etched onto the silver trophy with the likes of Woods and, most recently, Rory McIlroy, along with other Hall of Famers, major champions and former world No 1s in between.

All in all, a fitting outcome for getting it done despite everything the Year from Hell did to make this the most distracting sports season ever.