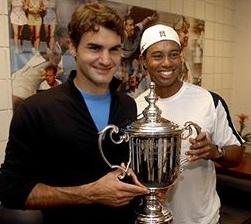 The names Tiger Woods and Roger Federer used to be synonymous with singular sporting greatness.

Unlike many other great athletes of their time, they had no teammates to support them. Success and failure alike were theirs and theirs alone.

And boy, did both enjoy their success. The rising stars that were Woods and Federer rapidly shot up the career milestone list with each successive year, and it wasn't too long before each man had the all-time majors record within their sights.

Even though the two men play different sports, theyve come to engage in a competition of sorts.

The relationship between the two is one of much debate. In the eyes of some, they're seen as good friends, while other view the pair as a nothing more than Nike teammates.

No matter which narrative you choose to believe, it cannot be denied that both men found kinship in their pursuit of sporting glory.

Federer was the first of the pair to achieve his goal, defeating Andy Roddick to capture his record-breaking 15th Grand Slam title:

While that was happening across the pond, Tiger was making a comeback from knee surgery.  Prior to it, Tiger captured the 2008 US Open on what Kenny Perry best described as “[beating] everybody on one leg.” Tiger’s improbable victory seemingly proved that he was destined to surpass Jack Nicklaus’ record.

But as we all now know, that's when Tiger’s world seemingly collapsed in on him.

It all started when the world found out about his womanizing ways. Tiger then decided to take a short leave of absence, before making a public apology prior to the 2010 season. His tourney play took a major downturn, most likely due to the slew of physical injuries and mental turmoil he's suffered over the years.

Unlike Tiger, Federer has been able keep relevant in the twilight of his career.

Whereas the highlight of post-2008 Tiger was winning Player of the Year in 2013, Federer's was in claiming two more Grand Slams as well as having appeared in numerous Sunday finales.

Perhaps the past two weeks best describes the way these two superstars have diverged. Federer, at age 33, was able to fight his way into the Sunday final at Wimbledon. Tiger, age 39, missed the cut at the British Open, where he finished ahead of only seven other players.

Both men have had an historic impact on their respective sports, but whereas Federer is still a great player, Tiger is a mere shell of his former self.