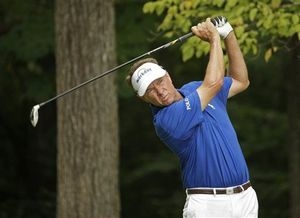 He just goes about his business methodically, getting the job done like a scoop of vanilla ice cream on a hot summer's day.

When Love cut down on his tour appearances, few noticed. But when Love and his Roman numerals came back, they opportunistically jumped right into a spotlight that was hoping to shine on Tiger Woods, because big brands in any sport linger long after their luster has gone.

It's enough to warm the left ventricle of a jaded heart.

Love was part of a golf generation that realized a cushy living could be made simply by pitching from landing spot to landing spot and finishing in theTop 20 or so in most tour events. Winning was nifty, carrying privileges like Slam invites, Ryder appointments, and the like, but it was still just another Top 20 finish.

Looking back, that era had all the dynamics of an accountant's convention.

It's why Tiger Woods exploding onto the scene was so welcome. Games had to be raised. Excitement reigned as Arnie-type charges returned.

Woods may have smudged himself and his game irreparably these days, but he's still a key reason why golf's Young Guns have brought the Slams and the tour back to life. They cut their teeth on watching Woods' golf drama.

But even they take a break. So, while Jordan Spieth collects on a $5000 best-first-pitch bet from Zach Johnson, the OG took over on the links.

Ironically, then, Tiger's lingering aura brought Love back into the golf world's consciousness, and in more ways than one. Good luck with that.

But as to Love's feat at Wyndham, nothing like one last hurrah before he sails off to check in on Uncle Thurston.