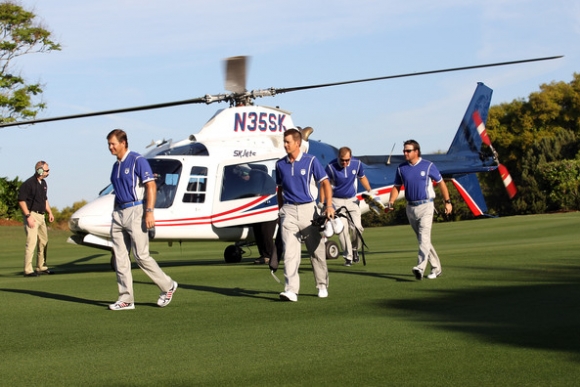 Martinis had to be involved somewhere in the Tavistock Cup's origins.

A competition that began as 'what if' conversations in the locker rooms of exclusive golf courses at two neighboring planned communities has now become the world's richest team exhibition on the golfing calendar.

The event came together as a local derby in 2004 after the Tavistock investment group purchased those two top-end Florida communities and courses. One was Lake Nona, and the other was Isleworth (because an outfit like Tavistock might find the original Isleworth a tad too quaint).

Of course, it helped that the country clubs involved had their share of ringers, all of whom had cashed in quite handsomely during their careers on the PGA tour. It also helped that Tavistock got the word around the private jet hangars where other prestigious poobahs parked during their commutes to wherever the 1% goes. Between martinis and before long, other exclusive communities were clamoring for a piece of the action.

Today, this list of high-rolling 'haves' has grown to six, with an impressive set of squads:

The event is slated for Mon-Tue 24-25 Mar at Isleworth. Tickets were sold on an RSVP basis solely to the participating clubs' members, sponsors, VIP invitees, and magnanimously, to representatives of the charities to which the net proceeds of this PGA-deemed World Club Championship are directed. The latter includes the MD Anderson Cancer Center, the University of Central Florida Foundation, and the Sanford-Burnham Medical Research Institute.

Everyone else can take a seat on the sofa or at the 19th hole of their own course and watch it on the Golf Channel.