Published on 1-May-2013 by Stacey Mickles 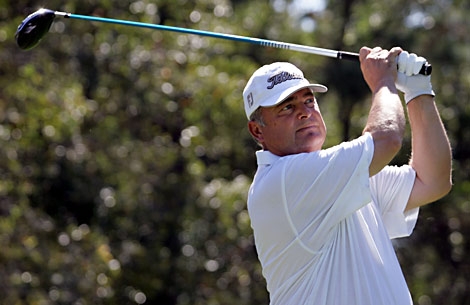 The mystery is finally solved. We finally found out Wednesday who the caller was who phoned in Tiger Woods' mistake at  the Masters.

I'd never heard of Eger either, but he plays on the Champions Tour (aka as the Old Folks Tour) and he called Tiger's mistake in to a friend, Mickey Bradley, who is a PGA Tour official and was working with the Masters rules committee.

Eger's call as it turns out, may have saved Tiger from being disqualified from the Masters because Ridley, according this Sports Illustrated article, was about to make the wrong call.

[Mickey] Bradley immediately called [competition committee chairman Fred] Ridley and Russell, the veteran PGA Tour administrator who is on the three-man Masters competition committee that is chaired by Ridley, a former U.S. Amateur champion and USGA president. Bradley also forwarded Eger’s text to Russell and Ridley. In his text, Eger wrote that Woods ‘didn’t appear to play by Rule 26-1-a.’ He wrote that he ‘appeared to be 3-4 feet back’ from his divot mark.”

Tiger would later agree that it was the right call to make, but what does it say that a golfer on his couch at home knows more about the rules then the actual rules committee?

Besides the Augusta 19th hole being more fun than a couch at home, that is.