British Open: All That's Missing Is Dorothy and Toto 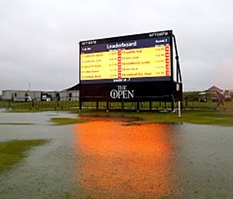 It's not only the conditions that are incredible at St Andrews this weekend.

It's the decisions that the Royal & Ancient Golf Club is making as to when the golfers should play and which of them should play.

Is it really that tough?

Has the influence of television and its programing blocks really altered the thinking of these staid old farts? They can't possibly be worried about tour packages being extended to Monday, because since when did the great unwashed matter to the landed gentry?

How in the name of the Dutch who claim to have originated the game did the R&A tell golfers to resume play in these winds:

That was not a manufactured incident. Here's and example of what the gales were doing to the competition:

It's all too clear who's running this show:

These elements didn't come out of nowhere. They'd best be aware of to whom they bitch.

Because this time, she's taken care of her melting-in-moisture issues:

Apparently, the R&A was harkening back to the hale and hardy days when men were men, and if the lowly mail-carriers can do it, then by the Great God of Thunder, so could golfers: So, soldier on, lads! And top up that hotel bill. Monday's now in play.