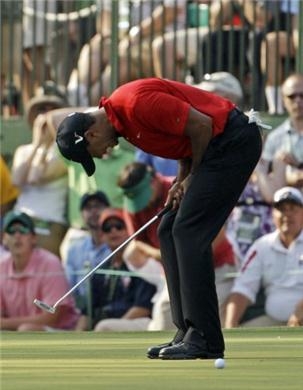 Last week, Tiger Woods cruised to his 79th PGA tour victory, an easy seven-stroke cruise that netted him over $1million.

I'm sure he'd trade that in right now to be in at least some kind of contention in this weekend's PGA Championship.

Instead, Woods finds himself 13 strokes behind Jim Furyk entering today's final round and without any hope of winning his first major since 2008.

Last weekend, the Bridgestone was over by Saturday, and everyone thought Woods would take that momentum to Oak Hill and finally win major number 15, getting closer to Jack Nicklaus. Obviously, that hasn't happened, and now the smug Woods will have to wait for the 2014 Masters in April for a shot at claiming another major.

Since Woods' affairs came to light in 2009, he's won titles --  five this season alone -- but can't win the big ones anymore. He tries to act like nothing happened to his psyche back then and even brought his son to see him win at Bridgestone last week. But something did happen; those were not good times, and it remains to be seen if Tiger will ever be the same again.

This season, after winning the Farmers Insuance Open in January and two tournaments in Florida -- the Cadillac in Doral and the Arnold Palmer in Bay Hill -- everyone thought Tiger would be ready to ring up another Masters and don his fifth green jacket. Adam Scott had other ideas, though, emerging victorious in a playoff over Angel Cabrera with Woods finishing fourth, six strokes back.

The US Open was a disaster for Tiger, as he finished tied for 32nd place, 13 over par, and 12 stokes behind Justin Rose. Woods had won the Players Championship in May, which many call the fifth major, but he was never a factor in the US Open one month later. Tiger has won the British Open three times and was in contention for most of the weekend, but rival Phil Mickelson shot a 66 on the final day to win his first Open title while Woods finished tied for sixth, five strokes back.

Today, Tiger will be close to finishing up his PGA round before the leaders even start teeing off. I'm sure an army of cameras will still be following him, and he'll come up with yet another excuse why it didn't work this week.

Woods remains a great athlete, a great golfer, but an all-around bad guy who was never nice to the press before his incident and rarely nice to the fans. Karma and age are catching up to this billionare, and after today's excuses, I can't wait to hear what they are next year when he fails again for major number 15.