Ass From His Elbow: Questions Over Cause of John Daly's Open Bailout

Published on 13-Jul-2013 by Xavier McSpaniel 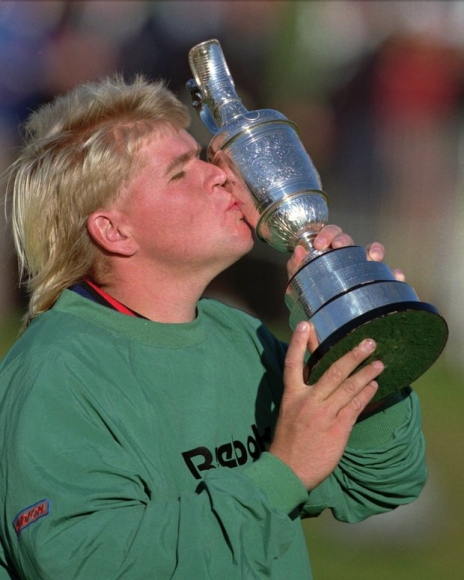 News earlier this week that Major winner and trouser patriot John Daly was pulling out of the British Open due to an elbow injury was largely taken as read.

So, too, his explanation for how the injury flared at the recent Greenbrier Classic:

''I was just trying to chip out," Daly told golf writer and characterless trouser-wearer, Doug Ferguson, "And there was a root under the ball. It wasn't more than a 50-yard chip shot. But that's the pain I've been dealing with.''

The pain is significant: a torn tendon for which Daly will undergo corrective surgery and then rehab for 3-4 months. It is widely accepted the tear is the result of nothing more than golf-related activity.

We at The Daily Player beg to differ.

Our investigations have revealed John Daly suffered the elbow mishap on the set of ESPN's 2013 'Body Issue' photoshoot.

Performing the third component of his usual cross-fit routine -- comprising a yardglass of Bud, a packet of Camels, and a scratch of his groin -- he yanked the joint, leaving various props in ruin and a photographer hospitalized. To the disappointment of all, Daly was subsequently ruled out of the prestigious ESPN reveal, making way for the inferior and frankly cringe-worthy spectacle of septaugenarian swinger, Gary Player.

Although the true circumstances of Daly's injury have brought unexpected controversy to the Open, it hasn't deterred other pros -- notably Phil Mickelson, Paul Lawrie and Nicolas Colsaerts -- from engaging in their traditional preparations.