Are They Playing the TPC from the Reds This Year or What? 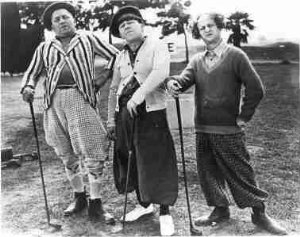 Dudes on the PGA Tour consider this the fifth major.

Sawgrass is supposed to be their course.

But who's the daddy this year?

With almost two rounds completed, the Players Championship is being infested with crazy-low scores. They're being rung up by Jason Day, a Swede, and lotsa guys named Moe.

Why? Is Fowler playing with a niblick, spoon, and mashie in his bag or something?

Look at these scores! This is how a course is set up for a wannabe major? This isn't even target golf. It's damn near pitch-&-putt.

The hell of it is, Jordan Spieth is shooting par, and he's probably gonna miss the weekend. Did you forget to practice on a carpet Friday morning?

The tourney crew had better be huddling, figuring a way for Sawgrass to salvage some pride over the weekend.

Maybe they'll put steamrollers on the greens, or suck the moisture out of them, or import a few sequoias from California. Maybe even park some gators posing as land sharks on the closing greens.

Anything to distinguish it from, say, the Lenny's Bail Bonds Open in Dry Heaves, Nevada.

Because right now, what's being done to an alleged showpiece tournament is a crime.