Angry White Dude: So Glad It's Over 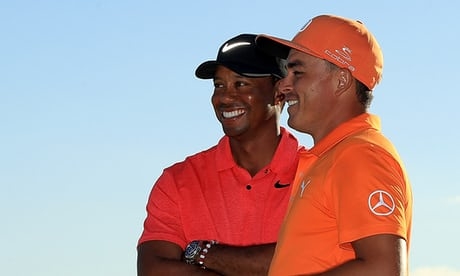 I don't golf. Never have. Never will.

To me, it's slow, boring, and expensive to play.

I'm with the late Sir Winston Churchill, who called it a good walk spoiled.

I don't follow golf, either, but I do watch sports and sports-related shows.

So for me, this stupidity started last Wednesday. It was all over the sports channels that your favorite golfer -- Tiger Woods -- would finally be playing in some event called The Hero World Challenge.

The sportscasters were so excited about this that I thought many of them were going to have to change their pants during their broadcast.

They could hardly contain themselves with their enthusiasm.

So when Thursday came, I had to wait to see if he was going to let all of you down again.

The news finally came in. Tiger had shot an opening round of 69 and was 3 shots back.

Great. In back of whom?

I knew who was 3 shots behind, but I was never told who was leading!

Friday, Round 2, and Tiger shoots a 68 that keeps him in the hunt.

But who is winning?

How far back is your returning hero?

Saturday, Round 3, and the mighty Tiger goes down in flames and shoots a 75.

But I swear that I still don't know who is winning the damn Hero World Challenge!

So, on Sunday,  here's the headline:

Make sure you keep an eye out for a new and improved Tiger next time out.

Yes folks, PEDs can and do make a difference.

I wish Tiger would just go away. He's the Dale Earnhardt of golf. Fans love him and he makes the most money, even though he hasn't won in forever!

I'm so glad this weekend is over!