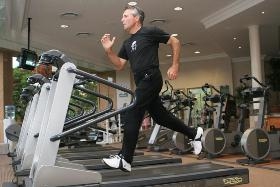 They’ve got the bods, and they’re proud to parade them.

Yes, that includes Player, who collected nine golf majors back in the day.

He, too, will be featured in ESPN the Magazine’s upcoming Body issue.

Player, even at 77, has an amazing body for a man his age. He’s a well-known health nut with a rigorous daily workout schedule that has remained the same for over half a century. One of the original inductees into the World Golf Hall of Fame, the South African has long advocated a regimen of personal fitness than anyone can do.

Bodies featured over the years in this issue have been some the hottest in sports such as Serena Williams, NASCAR's Carl Edwards, and Clips' hoopster Blake Griffin.

If you're not familiar with the Worldwide Leader's response to Sports Illustrated's Swimsuit issue, most of the athletes appear in the nude. Yes, that will include Player, and don't be surprised if he puts the younger bods to shame.

Even John Belushi's, back in the day.