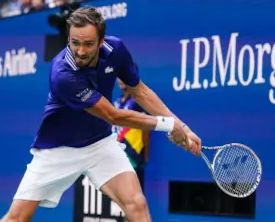 Relatively, Grand Slams happen in baseball all the time.

In MLB alone, with 30 teams playing 162 games each, there are more than enough opportunities for a hitter to go deep with the bases loaded.

In golf and tennis, though, the term is much more distinctive:

No one has ever done it in the PGA's modern era, and only Bobby Jones has done it at all.

Getting to the US Open after racking up the previous three Slam championships is a challenge in itself, but that's where Novak Djokovic had positioned himself coming into Arthur Ashe Stadium this year.

Dude cruised through the bracket but surely knew the final would be where the rubber would meet the road.

Based on seeding alone, Daniil Medvedev presented the most formidable opposition to Djokovic making history. Even more pertinent, though, is the fact that the Russian's had a 4-4 record against him entering the final, winning three of their last five matches.

Being real, then, if the 36-year-old Serb was gonna earn his 21st Slam title -- which would be yet another record -- he needed to beat the odds of time -- an 11-year age difference -- and track record.

It's usually Djokovic who returns hot serves and damn near everything else, but in this one, Medvedev beat him in every aspect of his own game:

What's more, Medvedev was broken only once in 15 service games.

Djokovic had counted on the immensity of the moment to sweep Medvedev up in it. Instead, it seemed the Russian was rather basking in it.

So much so, he chose to celebrate his victory on court with the move ju jour -- it's a FIFA gamer thing: L2+Left -- designed to please the Zoomers who witnessed the proceedings.

The remaining Old Guard of tennis won't be doing that, but with Medvedev and the other young guns leading the charge, there may not be many more chances left where they have that choice.