Lowly Watford Stings Liverpool; Reds' Run at the Record Streak Is Over 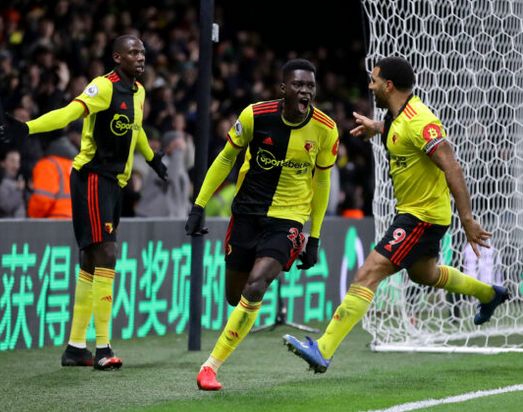 It's not easy being invincible.

Ironically, Jürgen Klopp's juggernaut is a virtual certainty to win this season's Premiership title by a wider margin than Arsène Wenger's 2003-2004 Arsenal club that went undefeated for an entire season of league play.

The Reds are 22 points up on second-place Manchester City with 10 matches to play. Dudes would have to fall flat on their faces to only claim the trophy by 11 points.

After a season that could only be described as splendid before the Premiership's first enter winter break, The 'Pool's returned from their R&R to discover they're now rusty and ragged.

A listless draw at home to bottom-feeder West Ham United as well as a subpar loss at Atlético Madrid in their Champions Cup first leg has furrowed brows around Anfield.

Maybe Jordan Henderson should stroll into the boardroom and ask for his contract to be re-done. The Reds haven't been the same since their captain's hamstring red-lined in Madrid.

Klopp & Co coulda used him again today, as Watford pulled themselves outta the drop zone by shocking Liverpool, 3-0, in a match that accurately reflected the score. It dashed their chance to ...

When the Reds are on the pitch, it's a sure thing that there'll be a dangerous Senegalese winger in action.

That was true in this clash, too, except instead of Sadio Mané, it was the Hornets' Ismaïla Sarr.

After accepting the challenge as escape artist in December, OG put a charge into Watford to give them hope. However the side fell into a funk of late -- winless in their last five -- before coming back to life in this one.

He pushed all the right buttons against a still-unsteady Liverpool, especially in attacking Dejan Lovren, who was replacing the injured Joe Gomez. Specifically, enforcer Troy Deeney and Sarr made the Coat's life hell.

It'd be a great idea if the Reds did before meeing Atléti for the Champions League second leg on Wed 11 Mar.

As to the Hornets, their task is to simply maintain form: Easier said than done, but at least they've banked three points the competition wasn't expecting them to get.

Those could be huge when all is done and dusted.