Ajax Is Back, Shocking Juventus outta the Semifinals 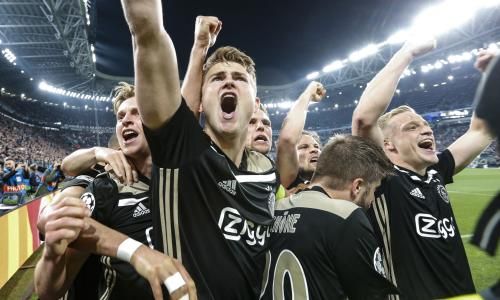 After their first-leg 1-1 draw in Amsterdam, Juventus were considered strong favorites against Ajax to take care of business at home, mainly due to the Cristiano Ronaldo factor.

What transpired was completely different.

The young Dutch side went to Turin, put on a great team performance, and beat Juventus, 1-2, advancing to the Champions League semi-finals.

It's the earliest since 2015 that Ronaldo's been sidelined in this competition. Ironically, back then, it was Juve who eliminated Real Madrid. Frankly, it was he Juve teammates who were the culprits this time, too.

In the early stages, the Zebras tried to capitalized on the home-turf advantage, and de Godenzonen -- the Sons of Gods -- were exploring counter-attacks.

Then, in the 28th minute, a Miralem Pjanić corner found a surprisingly unmarked Ronaldo, who headed home past Andre Onana:

Still, Ajax didn't dwell on it. In the 34th minute, they leveled through Donny van de Beek.

Hakim Ziyech's howitzer deflected off Juve's defense and ended up becoming an assist for van de Beek, who got in front of Wojciech Szczęsny and slotted home.

Throughout the first half, the homies were blowing chance after chance, which came back to haunt them in the second 45.

That's when those Sons of Gods started taking advantage of the numerous Juve turnovers.

The Dutch side began playing as they were at the Amsterdam Arena. They didn't feel the atmosphere in Turin, and played the sorta football that woulda put a tear of pride in Johan Cruyff's eye.

They finally broke through in the 67th minute via Matthijs de Ligt and totally changed the game's tone.

Lasse Schöne's corner found de Ligts, whose headed gave the Dutch side a crucial away goal, negating what Juve had done in Amsterdam:

Juventus were stunned, losing their composure and ultimately their shape, as even Ronaldo went missing.

Ajax actually popped a third through Ziyech, but it was ruled out for offside.

This was an incredible result from Ajax, who can't compete with the big-brands' salaries and will surely lose de Ligt -- probably to Barcelona -- at season's end. But their famed football academy is cranking out talent like clockwork again, so they could actually have a feisty future like they did in a bygone era.