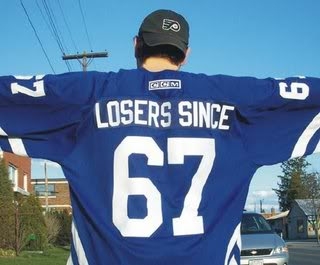 This wasn't a new idea.

But new ideas and Toronto Maple Leafs haven't fit together in the same sentence for decades.

Terrence Siebert of Hamilton, Ontario was only 57 years old and was truly a proud member of Leafs Nation to the end. Little did he know that -- as he looked on at age 11 -- when Toronto hoisted the Stanley Cup in 1967, it would be the last time he would gaze upon a scene from hockey heaven.

Instead, the Leafs made certain he'd spend the rest of his fandom in hockey hell. Like in the 2013 playoffs, after leading the Boston Bruins three games to one and being forced to a seventh. It was pure Leafness:

So, as he saw the final curtain coming down, Siebert knew there was only one way his tortured hockey soul could be properly put to rest. It was time for his team to symbolize for him what it does best. Get in a hole it can't climb out of. One can only imagine the dirge that was chosen for his sendoff.

Elaborate send-offs of hardcore fans have taken unique forms from time to time. Like the Steelers fan who did take it with him by being buried in his black-&-gold pajamas, reposed in his favorite recliner, beer and cigarettes by his side.

And those who wouldn't be caught dead -- literally -- in any casket that didn't have their favorite team's logo on it. They even make lovely parting gifts -- as it were -- for minor league teams that believe their fans should plan ahead.

In fact, variations on the theme have become a niche industry. Here's one in Kansas City:

If it's any cosolation to the late Mr Siebert, at least he's gone to a place where he will no longer suffer the indignities that his loyalty has foisted upon him. Assuming, that is, he doesn't see a Canadiens fan there.

And if he does, he'll probably think he didn't make it to heaven.