Angry White Dude: What Would Lombardi Do? 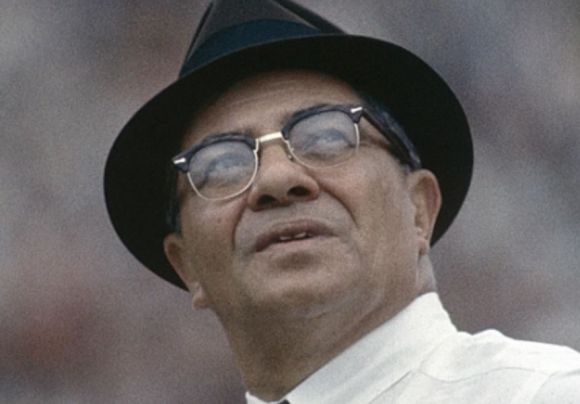 This is not your dad's NFL and certainly not your granddad's NFL.

Let's take a trip back in time to see what would've happened if Vince Lombardi and the Green Bay Packers had been playing in 2019.

Yes, the Pack just got their noodles -- or whatever the hell's trendy in SoCal these days -- totally devoured by the Chargers in a limp display of protecting a faux home-field advantage ...

... but let's go back to their only other loss this season because it was more exasperating.

At the time, Green Bay was undeafeated. They were playing the Philadephia Eagles at their actual home in a national TV game.

This was the Week 4 edition of the NFL's laughably named Football Night in America -- a totally unoriginal ripoff of the legendary Hockey Night in Canada -- the only game going on. Everyone was watching!

There they were. First-&-Goal, trailing 34-27 with time running out. What's more, the Eagles were out of timeouts.

This was not rocket science.

Lombardi and Hall of Famer Bart Starr were mind-melded. Starr called the plays because Lombardi had him well-versed in how he saw the game plan.

So, you don't have as many Hall of Fame linemen or running backs because you can't pay everyone. What you do have is expendable players at every other position.

Thus, in 2019, you have to trust your superstar slinger to do it all, and when has Aaron Rogers ever done it all?

Back to the Eagles game. Again, first-&-goal with the game on the line. What happened?

Four straight incomplete passes, and the Packers lose at home on national TV.

Why in the world does Rodgers have everyone saying that he is one of the best QB's in the NFL? One Super Bowl in 11 years. That's the very same amout of Super Bowl wins that Trent Difler has.

WWVD? What Would Vince Do?

Easy, tell Starr to hand off and get ready to kick the extra point!